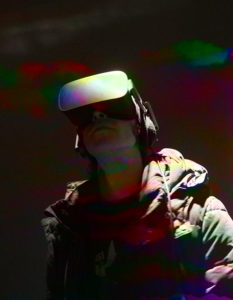 (Reposted from Odyssey’s feed) The BBMC and Odyssey-based artists have been examining new 3D social VR spaces and assessing their potential as sites for performance and presentation. Exploring these new 3D worlds is part of a year-long project called VR Forward.

There are 2D VR based artists who have found ways to seamlessly translate their practice into 3D VR, (such as the Canadian Second Life artist Bryn Oh), but many others have been tentative in approaching this new technology. This may be especially true of those working in performance-based disciplines. There is an instinct behind this reticence to adopt. Still firmly rooted in 2D VR, a large percentage of artists working with social VR are long standing members of online communities — they have seen virtual worlds come and go and understand the impermanent nature of virtual spaces. They know that certain elements need to be in place for a social VR platform to succeed. Perhaps the most important of these is access. 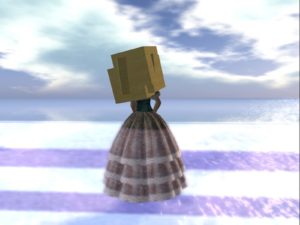 While it is understood that there are many complexities associated with the development of new platforms (and the technology to use them), it is worth noting there has been an almost complete shut-out of the Mac user demographic. Developers are building headsets and programs exclusively for PCs, often with no intention of developing Mac compatible versions. Given the  fact that social VR thrives on user-created content, this has to be a drawback. For many artists, this issue of access, along with the often prohibitive expense of purchasing the required technology, have been significant barriers to entry and early adoption. For Apple’s part, they appear to be skipping VR altogether and are developing AR technology instead.

Equally challenging are issues around stability. Most of these platforms are built on capitalist models and developers remain confounded over how to monetize their new technology. Time will tell whether or not these 3D social VR worlds remain viable enough to support a longterm investment of time and resources. There is great potential with some of these spaces, but if history is any indication, they will rise and fall based on the strength of their communities.

There’s encouragement with the introduction of the new standalone headsets, like the Oculus Quest. Since these headsets are not tethered to a computer or external OS, they are likely to make 3D VR more accessible to a wider range of users. That said, some have concluded, perhaps prematurely, that headset technology is a flash in the pan, a stepping stone to the next big thing, and so they are choosing to wait.

Throughout 2019 Odyssey and the BBMC, led by artists Jeremy Turner and Liz Solo, have been exploring 3D VR space looking at the following criteria:

Here are some impressions on 3D Social VR platforms Sansar, High Fidelity, AltSpaceVR, VRChat and NEOS VR as of December 1, 2019.

High Fidelity is an open source platform co-founded by Irena Freidrica Heiberger, Ryan Downe Karpf, and Philip Rosedale, (the creator of Second Life). High Fidelity started with a great deal of promise, offering access to personal spaces, building tools and a growing community of creatives. While High Fidelity is the only VR platform with the foresight to offer a 2D client for Mac users, the Mac interface is glitchy and even if your machine meets or exceeds system requirements, the program is likely to crash. Now, with the recent announcements about a refocussing of High Fidelity from social VR to “enterprise communications” and news of a divestment and layoffs, the early vision of a thriving creative community has faded. At this High Fidelity General Assembly from April 2019 you can literally feel the community deflating as Rosedale justifies the decisions to downsize and narrow High Fidelity’s scope. 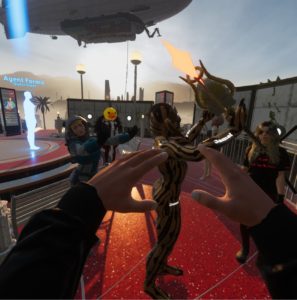 lends itself to social interaction with a diverse and interesting international community. There was a significant upgrade to Sansar a couple of months back and it runs very smoothly, a big improvement. The quality of light is exceptional. The addition of simple in-game quests feels like a bit of a reach but at the very least they are a good way to learn the interface. There’s the added bonus of access to building tools and the ability to create your own free customizable space(s). Sansar developers had the insight to offer a 2D interface for those without a VR headset. On the down side, recent news of layoffs at Linden Labs has generated uncertainty around Sansar’s future.

AltSpaceVR, by Microsoft, is a fun-focussed place offering lots of opportunities for curated experiences 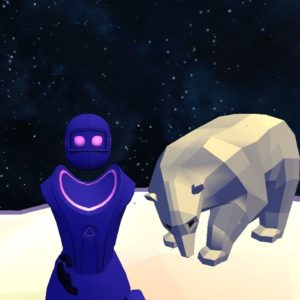 and live events. The support teams are accessible and friendly. Odyssey artists were recently hosted by AltSpace in the presentation of live artist talks. There is a politeness to the curated experiences that is as refreshing as it is weird, but the overly simplistic avatars and lack of choice to customize them are frustrating drawbacks. AltSpace does offer the opportunity to generate your own spaces from templates. You can host your own events and experiences, stream videos and the support staff are always close at hand to assist. As of now the libraries are still quite limited but everything is free. This is a very simple platform with easy to access to tools but no room for any significant in-world creation.

At the other end of the spectrum from AltSpace is VRChat — created by Graham Gaylor and Vancouver’s Jesse Joudrey, it’s the wild west of social VR worlds. For the kinds of 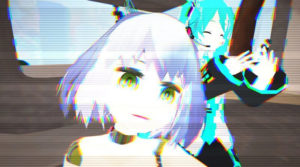 performative interventions many Odyssey artists are known for, VR Chat is a great place to run free. The only thing is – that’s what everyone else in VR Chat is doing — intervening, parading, making statements, shit disturbing. The platform has enjoyed a surge in population and VRChat is on the go 24/7. There are some incredible builds, including startling hyper real simulations and fun in-world games. There are loads of free avatars and objects to choose from but customizing objects or avatars, along with creating and building spaces, does not happen in-world. Items need to be build in external programs (like Unity or Blender) and uploaded to the grid. VRChat is compatible with the new standalone Oculus Quest headset. With a primary goal of connecting people and another successful round with investors VRChat continues to flourish. For now.

Neos VR is an innovative, independent social VR platform built by Frooxius and Solirax. It is unlike other 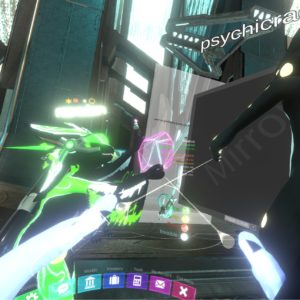 VR spaces in that it has been created for in-world building. It has a remarkably intuitive interface with finger tracking enabled on all headsets. It takes a moment to get used to the tactile nature of interactions. At first the layers of building tools that blossom from your fingertips appear complex, but the many tutorials will quickly teach you the method to the madness. You can spawn as many worlds as you like, build in-world with brushes and handheld tools, import items. There are regular community gatherings with lots of access to the developers. NEOS is also compatible with the new standalone Oculus Quest headset. Crowd sourced and community based, and operating with a small team, NEOS VR offers a real alternative in social VR. In the realms of Social VR, we’ve said it before and we’ll say it again – NEOS VR is the place.

Based on our research Odyssey has chosen to set up a 3D studio space in NEOS VR, so expect some projects to emerge in 2020. We are also experimenting with sister studio spaces, under construction in Sansar and AltSpace.  Odyssey retains its collective artist space in Second Life, still a major hub of activity. Despite dips and rises in SL’s popularity over the last years, Odyssey has been holding strong in SL since 2005.

Because of the large investment required in learning and producing inside new platforms, many Odyssey artists are watching and waiting for the coming virtual worlds, not convinced that the current social 3D VR spaces have staying power. Others are forging into these emerging spaces, in search of possibilities and experimenting with new methods of creation. – JE Solo